Multitude of Details Create Simple, Clean Lines — And Impact for This Kitchen

01 Oct Multitude of Details Create Simple, Clean Lines — And Impact for This Kitchen

The architect was moving from the West Coast to a new home on the far edge of Cape Cod. He was looking for something simple, elegant and distinctive for his kitchen and nearby rooms, but he didn’t know what that might be. A designer he had engaged for another part of the house suggested the kitchen design center at Botello Lumber in nearby Mashpee, Massachusetts. It became one of several design centers they decided to check.

Botello Kitchen Designer Edan Dayan met them and showed them through the Botello display. But nothing really grabbed their interest until Edan pulled out an expired Grabill sample with a hand-rubbed gray-blue finish on alder.

“They really liked the color and especially the hand-rubbed finish that Grabill does so well, except they preferred maple to alder,” said Edan. He asked Grabill to match the sample in maple and also provide a similar sample that had a lighter appearance, using more gray and less blue. Grabill did this and the client ended up liking the lighter gray-blue sample even better. By this time the architect had also become comfortable with Edan and Botello, and the project was on.

As an architect, his client already had a vision for what he wanted and had down “the basic building blocks” for the kitchen, said Edan. The kitchen Edan created is what he calls a transitional look with a contemporary flair and Cape Cod-like colors. The cabinets are maple, with 2 ½-inch Wide Shaker Doors, and a hand-rubbed finish of custom bluish gray. The perimeter countertops are Laurentian Green Granite, with white quartzite island and hutch countertops to provide a standout accent. 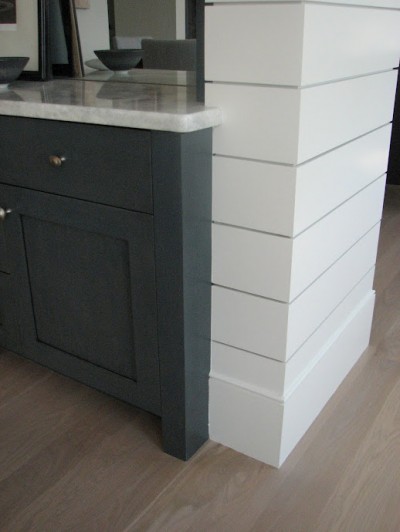 The client also provided an extra bit of challenge by wanting it all to look seamlessly simple, with appliances artfully integrated with the cabinetry; no exposed fasteners or joints; no holes for shelves or gaps between the shelf edge and cabinet — just clean, clear lines throughout.

“They do much more than enter orders into a computer,” said Edan. He worked with Grabill’s Dustin Case and found him very expert and helpful in “translating what I was trying to do with the cabinets into how to make the cabinets, because there were so many details to think through, and they all had to work together perfectly.  When putting together a lot of pieces for a finished piece, Dustin was very good at tweaking things and reviewing and then tweaking some more and reviewing again.”

For how simple it looks, “we ended up doing a lot of fine-tuning,” said Edan. “But I had a lot of confidence in Grabill and my installers.”

It turns out his faith was well placed for an outcome that proved to be an amazingly elegant blend of form and function that grabs the eye with an impact you don’t expect. Edan’s precision-guided client “loved it. He was really excited.”

Trust Grabill with the details? You bet!